This section includes information on the various Newell families in the UK  that I have researched (I plan to included all of Ireland in this section since it was under English rule during the period considered). Again, it includes a number of different related family names including Newell, Newall, Nowell, Neville, Knowles, Noel, etc.

I have organized the material by region starting with a region I call Bristol Channel which includes not only the City of Bristol but the areas bordering on the Bristol Channel (north Cornwall, north Devon, Gloucestershire and South Wales) and the hinterland south of Bristol (Bath, north Somerset and north Wiltshire). These areas have historical ties to Bristol (see map below).

I selected this as my first region since Bristol merchants had some of the earliest connections to Newfoundland. John Guy’s colony at Cupids , Conception Bay was established in 1610 as a partnership between Bristol and London merchants. In the late 18th century several prominent  Newfoundland merchants including John Noble, Jeremiah Coghlan and John Newall had their home base in Bristol.  My first report in this section explores the life of John Newall, merchant of Bristol and Harbour Grace. 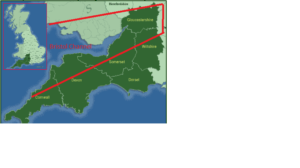 The second region covered is Scotland.  Given the size of these Scottish files I was forced to post them as different documents (I, II, III, etc.).

No part of this site may be reproduced in any form.