When I started researching the Newell family of “The Dock”,  Newfoundland there were no DNA test; subsequently, when DNA tests started to be used in genealogical research there was a feeling that DNA would solve all the mysteries but like most new technologies it simply deepened them. My research related to using DNA to investigate my family history has now become the primary focus of my research efforts and has such I have now had to divide it into different sections. This introductory section maps out the different areas of my research and provides background information on the various types of DNA test that I have used in my research. There is also a brief recap of my family history at the end of this section.  The DNA section is organized into sub sections that address different areas of my research into my DNA. These include: These sections are organized  under the the My DNA Tab on the Web Site Menu (see below). 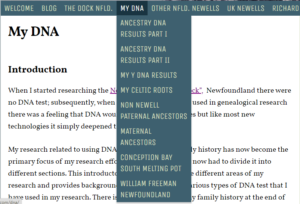 Due to the size of the Ancestry DNA paper it was necessary to split it into three sections. The first section reviews my closer DNA matches in Newfoundland; the second section reviews distant DNA links in the UK, Ireland and Continental Europe while the third section reviews links to Colonial America.

Background on my Family

This paragraph presents a brief recap of what I know about the origins of my family; more complete information on my family history can be found under “The Dock” Tab on this Web Site. My earliest fully documented ancestor is my ggg-grandfather Philip Newell (AKA Noel, Nule) who was married in Harbour Grace, Newfoundland in 1784.  I  have an original copy (dated 1820) of Philip’s grant to his land in ‘The Dock’ , Bareneed, Newfoundland that references his having cleared the land in the 1780s.  There are also other references to Philip in other government and church records dating from this period.  There is also some indirect evidence (from Philip’s marriage record) that his father’s names was James.  Philip is my earliest fully documented ancestor; however, there were Newells and Noels in Newfoundland as early as the 17th century. There is no direct evidence regarding Philip’s origins but there are family stories that suggest that our family may have come from the Channel Islands (the Noels of Harbour Grace also have the same story). However, there are other stories in our family suggesting England and even Wales.  Many families from the Conception Bay area of Newfoundland trace their roots back to southwest England, the  Channel Islands , Cornwall and Ireland.