Some of the earliest records of the Newell family in Newfoundland are from Trinity and Bonavista, Newfoundland which are approx 100 km north of  ‘The Dock’ (see map below). 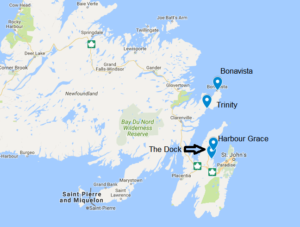 Newells first started settling in this area in the late 17th century, a century before Philip Newell settled in “The Dock”. A census conducted in 1675  http://ngb.chebucto.org/C1675/1675berry.shtml   enumerated two Thomas Newells: one at English Harbour [Trinity Bay] was married with a son and a daughter, nine men servants, two boats, a stage and a trainvat [for processing oil]; the other at Bonavista with five men, one boat and a stage was not married (see Francis  I. W. Jones, Summer 1999 issue of the Newfoundland Ancestor).

A list of Shipps Makinge Fishinge Voyages  to the area between English Harbour, Trinity Bay and Bonavista compiled in 1678  list a Nicho Newole (Nicholas Newell?) as master of a ship from Brixsom [Brixham, Devon].

1678 Thomas Newell not listed instead there appears a Thomas Newman, clearly written and without a family. Thomas Newell is listed in English Harbour with a wife, one son and one daughter.

I think it my duty to acquaint your Honour that to the north side of this bay are many extraordinary harbours and better fishing; one William Wyng has fished there some years (it being 14 leagues NWN from this place) who has still increased the inhabitants of this place very considerably, and this year one Nowill(Newell) has been that way who has more fish for his two boats than they have for shallops, so that next summer severall of the inhabitants of this harbour design to remove thither and their masters of ships that have fished there this year intend to be likewise, for it is certain the fewer boats are kept in a place the better the fishing.

The following information is from a paper by Prof. Gordon Hancock (2009)

In Bonavista Bay the interval survivals from twenty-two
listed in 1675-77 to twenty-three in 1708 included six surnames
(Brent, Gantlett, Knight, Newell, Shambler, and lilley). According to
the súmame evidence, inter bay movements account for only a small
proportion of these changes, such as the Tavemer family moving
from Bay de Verde, Conception Bay, to Trinity Bay in the 1677-1708
interval, and the migration of Thomas Newell from Trinity Harbour
and George Talbot from English Harbour, each to Bonavista 1675-77;
but only Newell was recorded at Bonavista (Green Island) in 1708.

This type of evidence makes this area a prime candidate for the origin of the Newells of “The Dock”; however, none of the researchers who have researched this area have identified a link.  My father (John Robert Andrews Newell) did suggest that there might be a connection with the Newells of Trinity; however, this might have been through a later marriage.

Hopefully, I will get an opportunity to revisit this topic in the future; however, here are some links to the early history of Bonavista and Trinity with Newell references:

Here are some links to the Newells of Trinity, Nfld.

Summerville was known as Indian Arm prior to the settlement being renamed in 1904. The Wild Cove Cemetery is an old Anglican Church Cemetery located at the farthest tip of the community accessible only by foot (approximately a 10 to 15 minute walk from the community), or by small boat:

Passed peacefully away at the Dr.G.B.Cross Memorial Hospital, Clarenville on August 3, 2021, Albert Newell, age 94, from Summerville, originally from Sacramento, Ca.  Predeceased by wife, Erika; brothers, Dominic, Ed and William; sisters, Gertrude, Margaret and Mary. Leaving to mourn are his daughter, Maria; sons, Gary, Pete, Karl and Steve; many grandchildren and great grandchildren, all residing in USA; as well as many nieces, nephews, cousins and special friend, Scott Abbott.

Albert Newell of Summerville, Newfoundland, who passed away at the age of 94, on August 3, 2021. Leave a sympathy message to the family in the guestbook on this memorial page of Albert Newell to show support.  He was predeceased by : his wife Erika; and his siblings, Dominic, Ed, William, Gertrude, Margaret and Mary.  He is survived by : his children, Maria, Gary, Pete, Karl and Steve; and his close friend Scott Abbott. He is also survived by many nieces, nephews, cousins.

I have contacted several decendants of this family, none of which have done DNA test, and they don’t claim to be decended from the Newells of Bonavista. The original death record for Abraham Newell who died at Summerville in 1917 gives his place of birth as Brigus. This suggest that they are an offshoot of the Newells of Brigus (see my page on that family).