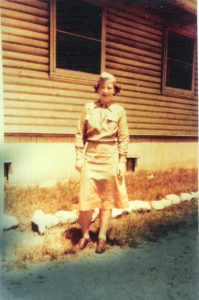 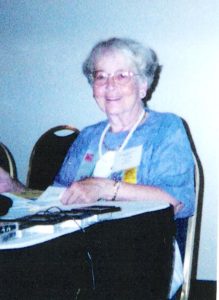 Jane Reed from Beverly MA, USA was the daughter of my Grandfather’s (Albert) sister Edith who moved to the US in the 1890s.  In 1972 she visited Newfoundland for the first time to rediscover her family connections which had been severed by a argument between my Grandfather and his sisters over the sale of the Newell Rooms in Labrador around 1908. At the time of her visit I shared my research with her and she subsequently  returned to Newfoundland and did in-depth research on the family.

CAMBRIDGE — In a summer when men have reunited to trumpet military exploits with pomp and fanfare, recalling the heroism and horror of D-Day and World War II, some women veterans remember their wartime experiences with disarming modesty.

“It wasn’t exciting. It was boring,” said retired Major Jane Reed, 75, of Beverly, discussing her service in the Signal Corps during World War II and her 20 years in the Army.

Still, there was “a real pride about being in the Army,” she said. And women veterans have “a common background that draws us together. We suffered through the same experiences.”

That bond drew nearly 400 female veterans to the Hyatt-Regency Hotel in Cambridge this weekend, where they rekindled old friendships and relived small moments of heroism and drudgery from wartimes past. …