This section, which is still in development, provides notes related to my DNA research for my maternal ancestors. 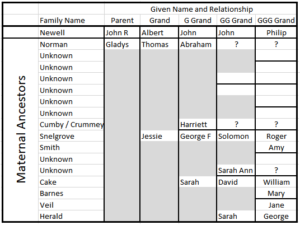 My mothers parents were Tom Norman and Jessie Norman née Snelgrove.  Thomas William Norman was born in Indian Harbour, Labrador in 1874 but lived most of his life in Bay Roberts. Tom married Jessie Snelgrove from Bears Cove, Harbour Grace in 1900. My Snelgrove ancestors are well documented and account for a disproportionate number of my DNA matches while my Norman family tree ends with Tom’s parents (my great grandparents) who were Abraham Norman and his wife Harriett Cumby /Comby / Camby  (DNA links to Crummey).  Abraham was born in Bay Roberts in 1838 and was living there in 1865 but in 1870 he married Harriett at Battle Harbour, Labrador.

Abraham was still listed as living in Bay Roberts in 1871 so he was likely fishing in Labrador that summer and married Harriett before returning home to Bay Roberts or possibly to her home.

In March 1873 , the year before Thomas was born in Indian Harbour, Abraham and Harriett Norman had a daughter Elizabeth born at Griquet (east side of northern peninsular of Newfoundland). Griquet is situated on the French Shore which was an area of northern eastern Newfoundland where the French had exclusive fishing rights from 1713 up to 1904.  Around the time that Elizabeth was born fishermen from Conception Bay were starting to fish for salmon and herring in this area and the Newfoundland Government was pressuring the British Government to end the Treaty. As part of their case in 1873 the Newfoundland Government conducted a survey of inhabitants on the French Shore  (Published in the  Journal of the House of Assembly of Newfoundland  for 1873).  This survey listed an Abraham Norman with a wife and one child living at Griquet.

Elizabeth was born in March 1873 which suggest Abraham was wintering in Griquet.   There was a Jacob Combey listed as a resident of Griguet in 1871 (but not before or after) so this could be Harriet’s father and if so she may have been staying there while she was waiting to give birth. 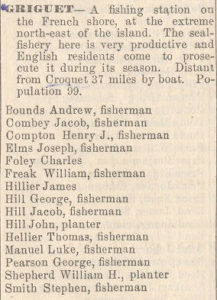 There were other Normans living on the French Shore in 1873 including: William Norman with a wife and 1 child at Great Braha (South of St. Anthony) and Richard Norman with a wife and 5 children  at Flowers Cove (AKA French Island Harbour) . This Richard  was Richard William Norman, the son of James and Harriett, who was baptized at Brigus 1n 1842. Richard married Johanna Whalen in 1863 and they had a daughter baptized at French Island Harbour in 1874.

This Richard was brother in Law to William Bush Bendell who was the agent for the merchants T. & D. Slade at Battle Harbour.  In addition, a  Henry Norman born 1849 at Clark’s Beach and  a descendant of the Normans of Brigus and Cupids was living at Pacquet  (also on the French Shore) during the late 1800s.

Thomas was born at Indian Harbour, Labrador in August 1874. Indian Harbour was the Labrador base for Nathan Norman (1809 – 1883) a Brigus merchant who had major operations in Labrador.

There was another son Henry referenced in Abraham’s Will who was likely the Henry Norman born in Bay Roberts in 1886.

From the historical data is clear that in the 1870s Abraham, like other fishermen from Conception Bay, was involved in the fishery along the French Shore and in southern Labrador (see my report on Labrador Connections).

Unfortunately, the trail of documents for my Norman ancestors ends with Abraham and Harriett and we have to rely on DNA and other secondary information to try and piece together their ancestors.  A search for Norman ancestors using Ancestry DNA found:

In addition, there were a number of 4th and 5th cousin matches to the Normore name in Newfoundland, especially from Bell Island. The Normore and Norman names were sometimes used interchangeably in early Newfoundland records and this may be another branch of the same family or I might have a separate link to the Normore family (see more discussion of these links below).

Normans and Normores  residing in Conception Bay  before 1810 include:

My Norman DNA matches suggest links to several Normans from Brigus. I also get DNA links that point to the Noels /Newells of Brigus (same family with Noel/ Noll being common early spelling that gradually changed to Newell) and general distant DNA links to other early (pre 1800) families from Brigus (e.g Antle, Roberts, Wilcox  and Bartlett).

DNA Links to Normans in Brigus:

I get a significant number of DNA matches that trace their origins back to a number of Normans living in Brigus in the late 1700s and early 1800s. However there are various versions of the Norman tree(s) for Brigus which are somewhat confusing; partly as a result of  the William factor.   In the 1817 Census for Brigus there were four Norman recorded:

In addition there was a third William Norman who drowned with his son John in 1813 and a forth who was married with two children and living in Bareneed.

I have made attempts to track the numerous DNA matches pointing back to the Normans in my family tree but only have limited confidence in the various branches and have found a number of cases where a branch also has other non Norman connections to me.  Overall my best guess is that I am descended from John Norman (1759-1801) who married Grace Walker (She later married John Antle). Assuming this is correct then John and Grace would be my 3 X great grandparents.  I also get DNA links to William Norman  b. 1786,   who has Dawe in tree which may be source of the match, and Mary Norman b. 1757,  who has members of the French family in her tree which may be a potential non Norman link.  I have several potential candidates for my  2X great grandfather who would have been one of John’s sons (Henry b. c. 1795, William b. c. 1796, John b. 1798 or James b. c. 1800) . I have solid evidence for John being a son of  John and Grace, the others are based on circumstantial evidence and /or other trees.  John is the only one of these with no DNA links but he appears to be C of E which fits with my family while the others are Methodist (the most common religion for Brigus Normans). In addition, John has a link to Bay Roberts through his wife  Mary Jemima Badcock.

Sorting out my Brigus connections is further confused by a number of DNA connections to Noels, Noalls and Newells of Brigus (same family where spelling of family name changed over time).  For example, Stephen Noall b 1826 likely a son of John Noall b 1798.

One non Brigus Norman family is interesting in terms of its connection to another family, (Oldford, Holford) that has a large number of DNA matches. This is the family of Joseph Norman of Greenspond who married Rebecca Oldford in 1837.

A significant number of my DNA matches  are associated with Sara Jane Porter (1760-1849) from Elliston who married George Oldford of Trinity in 1779.  My paternal great grandmother was a Porter and George Oldford’s mother was Mary Hannah Newell from Trinity. I have attempted to map out this family in my tree for the Trinity Newells and it appears likely that Rebecca was part of the same family; however, I can’t find any DNA connections with Joseph’s family.

As I indicated earlier, I also get DNA links that strongly suggest a connection to the Normore family name which was sometimes used interchangeably with Norman in early Newfoundland records. This could mean that: