When I started researching the history of the Newells of the Dock for a university project in 1971 my father (John Robert) suggested I contact Harold Newell.  At that time Harold was 81 and living with his wife at their home in St. John’s. Harold had researched the family history and had  numerous notebooks containing his research (which he did not show me) and over the course of several visits we discussed various topics related to the early family history.

Here is some background info on Harold: 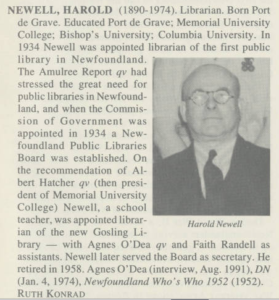 Encyclopedia of Newfoundland and Labrador, volume 4

Note: The Dock was frequently identified as either Bareneed or Port-de-Grave. 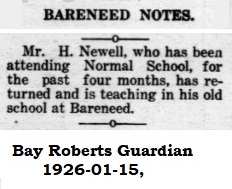 Harold was a graduate of Bishop’s University in Quebec.

Re his role in Newfoundland History Society

In a memo to Smallwood dated April 24, 1951, Crewe formalized ideas that the two amateur historians had “often discussed since the time when, about 1933, you began to share my own interest in … Nfld’s history, records and souvenirs.” He proposed the creation through legislation of a “Newfoundland Historical Records Commission” to locate, acquire, inventory, and preserve historical records, record the inscriptions of all pre-1880 cemetery headstones, collect histories of outport settlements, and publicize local history through publication. The Commission’s mandate would be to acquire old account books, diaries, family letters, photographs and the like, archive old court records, photocopy church registers, and preserve historic buildings and furniture. Crewe had discussed his proposal with several prominent individuals with a strong interest in Newfoundland history — book collectors and lawyers Jack Higgins and Robert Furlong, Gosling librarian and president of the Newfoundland Historical Society Harold Newell, journalist Michael Harrington, St. John’s city clerk Edward Foran, and Memorial University professor Moses Morgan.(19)

Re his role with Gosling Library

Newell wrote his two-page article for inclusion in Joseph Smallwood’s 1937 “The Book of Newfoundland.” Newell had been named by the government as librarian in 1934 but I think I am right in saying that most of the time between his appointment in July of that year and the opening of “the Gosling” about a year-and-a-half later was taken up with organizing, finding board members, buying books, cataloguing. And in that time, money and books were happily received, including, in 1935, an assortment of 2,000 books from Grand Falls founder Harold Harmsworth, Lord Rothermere, “many of which are standard works of reference, Newell wrote.

– NEWFOUNDLAND – In early November [1960], Mr. Eric Moon left the library services of
Newfoundland , after a sixteen-month stay,  take up his new duties in New York as editor of the Library Journal. Mr. Harold Newell, who retired last March has temporarily stepped back inot his old post as dirctor without  causing the merest perceptible jolt while arrangements are being made for
the appointment of a new Librari es Service head .

It is with deep sorrow and regreat that we have to record the death of three of our members.· .. The Honourable Campbell L. Macpherson, OBE, former Lieutenant Governor, who died on June 28, 1973; Herman Quigley, who died in May 1973, and Harold Newell, for many years a tower of strength to the Society, who died on January 2, 1974. Mr. Newell was a life member of the Society. Letters of sympathy
were sent on behalf of the members of the Newfoundland Historical Society to the sorrowing families.